There is a movie that has haunted me since childhood. I remember seeing it a few times as a kid, and I remember it scaring the shit out of me.

Some of the images from the film have scarred a part of my brain. I have tried to figure out the name of it for a long time now, but I was unsuccessful, until today.

The movie is called, The Peanut Butter Solution.

I was watching the third season of Eastbound & Down, and there is a scene where a character named Stevie is bald, wears a glued wig to his scalp, and someone pulls the wig off of his head, leaving him embarrassed and crying in front of everyone.

This image seemed very familiar. It was an image similar to a scene in The Peanut Butter Solution.

Eastbound & Down Reminded Me of The Peanut Butter Solution

I quickly turned on the commentary on the Eastbound & Down DVD to see if they were replicating the scene from The Peunut Butter Solution.

Turns out, that is exactly what they were replicating. And Danny McBride said the name of the movie I have been searching for for at least ten years now. The title makes it sound really dumb (The Peanut Butter Solution? Really?), however, the overall creepiness of it overpowers the lame title.

I remember specific images from TPBS that have creeped me out since I was a kid.

If you aren’t familiar with the plot, here is the overall synopsis.

A kid named Michael Baskin looks inside an abandoned, burned-down mansion and is so frightened with what he has seen, he loses all of the hair on his head.

He hates the way he looks and wants to stay inside all of the time. His sister glues a wig to his head. He plays in a soccer game, kills it with a hat-trick.

Then a bully pulls the wig off of his head and all of the soccer kids chase him and laugh at his bald, gluey head.

Two ghosts appear and give Michael a magic, insane mixture to blend and put on his head to make his hair grow.

He adds too much peanut butter, which ends up making his hair grow about 6 inches per hour. Michael’s best friend Connie, (a boy), puts some of the hair growing mix around his private parts. He ends up growing pubes so long that they come out through the bottom of his pants.

The art teacher from their school kidnaps Michael Baskin and about 20 other kids from the town.

The art teacher makes the kids work in a sweat shop and uses the constantly growing hair from Michael to make human hair paintbrushes.

The paintbrushes made from Michael’s hair are magical and make awesome paintings with little effort, and people can also step inside the paintings.

The sweat shop kids and best friend of Michael take over and ruin the art teacher’s operation and he gets arrested.

Please take a moment if you need to read those last few paragraphs again.

It sounds completely ridiculous, but this film was so scary and creepy when I was a kid, I think the overall idea and the images of seeing a kid becoming completely bald after seeing something scary was a bit jarring.

It teaches kids that if you get scared, you will lose all of your hair, and you will become depressed and will not leave your house or see your friends for months until you regrow your hair. Scary stuff.

Other People had the Same Experience

If you Google or check out Peanut Butter Solution videos on YouTube, I am not the only person that was frightened by this thing as a kid. Check out the comments.

There are many other people that saw this movie as a kid, couldn’t remember the name of it, and have found it again as an adult.

I have checked for it on DVD on eBay and Craigslist, but I have been unsuccessful so far. Peanut butter. I’m not sure what else to say about it. 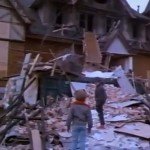 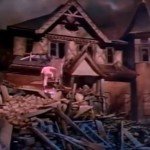 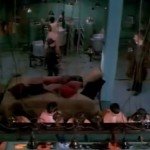 It came out in 1985 and it was a Canadian film. It was in rental stores, but I remember seeing it on cable stations like HBO (or Nickelodeon?).

After all of this time, though, I began to think that maybe I dreamed up these images since I couldn’t find anything online by searching for things like, “movie kid gets wig pulled off” or “kid wig walks into painting” and other similar searches.

Well, this is it. And I’m not the only one that was terrified after seeing TPBS as a kid.

Check out the trailer here. The trailer make it seem like a family comedy. But it is really a dark, life changing experience:

And, actually, after seeing it as an adult, I understand why The Peanut Butter Solution is a kids’ movie at heart. It ends up showing a bunch of children with all odds against them, only to overcome and beat the evil adult figure.

That is how most kids’ flicks work.

However, there is the creepy imagery that will stick with me for the rest of my life, and there are plenty of other people online that would agree with me about the horror of seeing this thing as a child.

THE FULL MOVIE CAN BE FOUND HERE FOR FREE ON YOUTUBE: http://www.youtube.com/watch?v=IQEJImGIy-Y